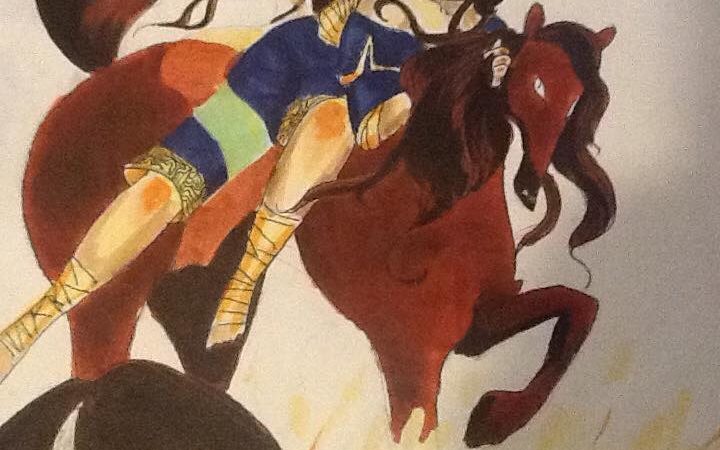 I was reading Stephen King’s Top 20 Rules for Writers and hit suggestion 9, and then 10, which hit me like a whallop with insight.  This past year, trying to get Fate of the Red Queen published, I’d been trying to finish Sen of the Woods.  Three months to finish a draft?  Like all the whooshing deadlines that publication for Fate has seen, well, that season of first draft is clearly gone past, carried into the universe still whooshing with all the others.

Was it #9 that stopped me? “TV—while working out or anywhere else—really is about the last thing an aspiring writer needs.”  No.  Not really.  I put aside the book to try and focus, using Jane Lindskold’s advice to focus on one project.  The binge watching happened after that. (Maybe in deep despair, because perhaps I ought not have done that?)

Hmm.  I’m no longer sure that it did.

You see, the first draft of Sen of the Woods was supposed to be part of a series.  Then a two “book” novel.  And they all crashed together to make a muddle.  I did actually finish the first draft in three months.  A season.  A season of writing.

It just didn’t feel like it, because the revision process shifted things so dramatically, that it felt like one long unfinished slog.

As King relates in the article, “That perfectly crafted and inviting opening sentence is something that emerges in revision, which can be where the bulk of a writer’s work happens.”

And it does!  For me, I’m still far ahead of the game in this book.  Fate has taken 14 years to get published.  The next book (not part of the demi-god Humna’s cycle) to be published, The Bone Reader, will have taken about 14 years.

It’s one reason why I tend not to look at a lot of books or articles on process.  For me, writing takes a ridiculous amount of time, and I certainly do not sit at my desk every day.  When I’m in the process of crafting a story, I get to it as often as possible.  Other days, between books, my body and mind is almost as at odds with itself as when I take too long a break when writing.

King is right, though: TV is a distraction that doesn’t help.  It is a form of story, but it shuts the brain down unlike the act of reading or listening to a story does.  I’m still not sure why.  Phones, FB, and so on, all distract.  And I have let distractions get to me, pull me away from my work. Or maybe as I tried to find some kind of peace in trying to get Fate published, trying to find some focus, I put writing aside, and… let it TV drown my mind.  It was a reaction, not a distraction.  As (I’m trying not to say this out loud as, really, it’s been almost a year since I hoped to publish Fate!) I approach the end of the process for Fate of the Red Queen, and start with The Bone Reader, I’m turning off distractions, and slowly waking up to the thing I love doing the best: Writing!