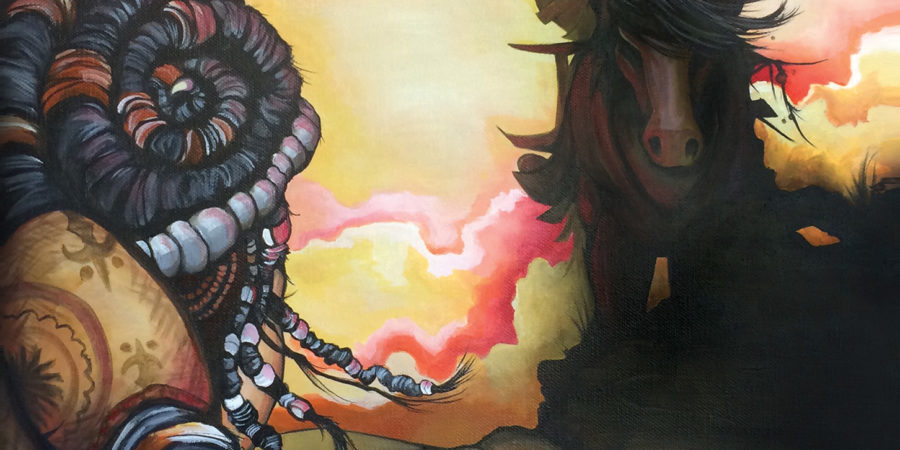 In The Legendary Past: Mesopotamian Myths, by Henrietta McCall there is an image that caught my attention. It is a mask of Humbaba, the ogre of the pine forest (Avon: Bath Press,1990 p. 41). It is in the British Museum. It’s not just eyes and a mouth; the whole design echoes a labyrinth.  Even with the recent discovery of events just after Enkidu and Gilgamesh defeated this demon, I could not help but see that Enkidu was guiding Gilgamesh on a journey of discovery.

Labyrinths are simple passages inward and then back out.  They aren’t places to get lost in, like a maze.  In some ways they can be seen as places to find one’s self. Ancient labyrinths can be found in various forms around the world, and grace the panes of Chartres Cathedral.

That image of Humbaba’s labyrinthian face led me into the story.  It had been percolating for about five years.  I wrote the first draft, and did not come back out till a few days later when I was done.  I took with me ideas from various books about Genghis Khan, and his blood brother.  In Paul Ratchnevsky’s book Genghis Khan: His Life and Legacy they write of this bond, “The oath of blood-brothers was… taken by members of different clans and was regarded by the nomads as more binding than the tie of a direct blood relationship.” (Cambridge: Blackwell, 1991 p. 20).  Temuchin, who became Genghis Khan, and Jamuka became blood brothers.

Seeing the Humbaba mask, and knowing that Temuchin and Jamuka had to face and cope with the strength of their own vision against their deep affection and bond with each other.  I looked at the labyrinth and wondered, what would have happened if Temuchin had decided to love his brother more than knowing how easily the Chinese kept defeating various horse clans of Mongolia—clans who were not united under one leader, one Khan.

Because you see, they’d fought each other. The various horse clans weren’t content with fighting and being continually defeated by the Chinese.  They were fractious and fought each other as well.  I’ve long had this belief that Temuchin thought this a pretty poor plan for his country and people.  Maybe others had the same idea he had, including his blood brother.  Jamuka defeated him once, and then there was a moment when he defeated Jamuka.  Temuchin asked Jamuka if he’d side with him, be loyal to him.  His blood brother said, “No.”

One story I read about Genghis Khan was when an enemy general shot him off his horse, he didn’t just kill him, but respected his ability and asked him to join him. The man did, and apparently became one of his best generals.  He was ambitious, and ruthless, and was not a warm and fuzzy kind of guy—but he valued loyalty, and not just to himself (though, we can probably accept he valued it primarily to himself).

The future leader of all Mongolia once faced his blood brother and had a choice. In The Red Khémèresh, my characters don’t have the same awful choice, but it was that question, and that mask that carried—and carries—a great deal of the back story of the novella.

May you always have a guide when you face your Humna, and always find your Avensen.